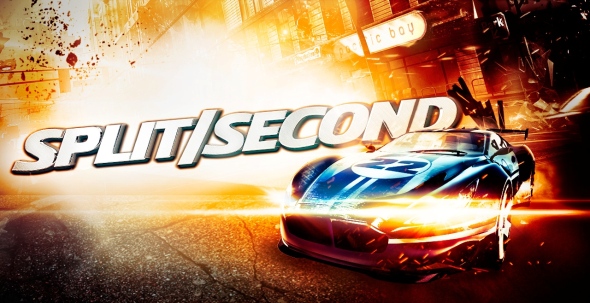 Split Second is a racing game from Black Rock Studio which is very much in the spirit of the Burnout and Need for Speed series of games. However, what makes Split Second unique is the highly destructible environments that can be used to wreck your opponents or completely change the circuit opening up new routes and short cuts.

As you slipstream other cars, jump and drift around corners you build up power which can be used to trigger “Power Play” events. These range from blowing up a petrol tanker parked on the edge of the track and dropping bombs from helicopters hovering over the track to crashing a 747 jumbo jet onto the runway or blowing up a hydro-electric dam. I was initially worried that these large set pieces might become repetitive and lose their impact, but as they are not that easy to unlock this has not been the case so far. 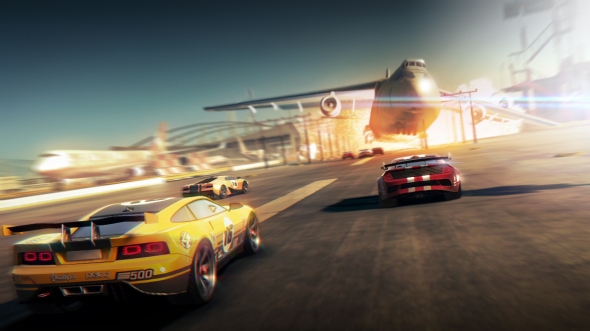 Most driving games clutter the screen with a Heads-Up-Display (HUD) that includes a rev counter, speed, lap times and track map. However, Split Second displays only the minimum on screen information, and this is positioned directly behind your car. This enables you to enjoy the full visual spender of the graphics, and it certainly looks stunning. Although, it must be said that the graphics were initially a bit of a disappointment based on the original rendered previews, but once you start playing everything moves at such a fast pace this doesn’t impact the enjoyment of the game.

Unlike GT5 and the Need for Speed series of games Split Second does not feature licensed cars. However, it is clear that many of the cars in the game have been “inspired” by current production vehicles including the Nissan GTR, Ferrari F430 and Bugatti Veyron. A good example is the Cobretti Vortex which looks rather similar to a Lamborghini Gallardo in my opinion. 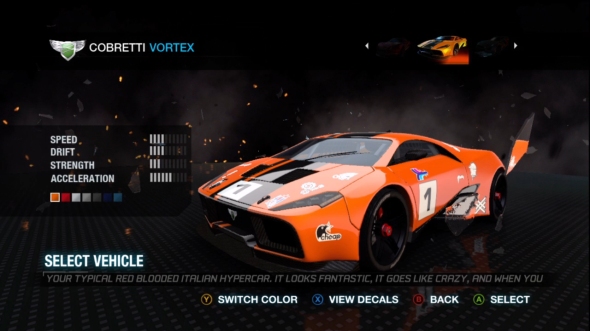 The core of the single player mode is based around participating in 12 seasons of a television show. If you are thinking of “The Running Man” movie starring Arnold Swarchenegger or “The Killing Game Show” video game by Psygnosis on the Amiga 500, you will get the idea. In addition to the standard races where you incrementally unlock faster cars and more challenging circuits, Split Second also features a number of unusual games modes.

These include “Elimination” where the last car is eliminated at periodic intervals during the race until only the leader is left, “Air Attack” where you have to dodge missiles being fired at you from a helicopter gunship, and “Survival” where you have to overtake trucks which are dropping explosive canisters on the road in front of you. These additional modes provide some variation to the game play and can be a fun diversion from the full on racing. 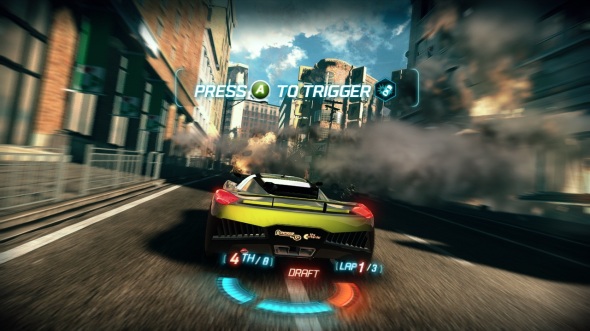 Unfortunately, there are two faults with Split Second. For some unexplainable reason the developers have decided that you can only use the right should button as the accelerator. This is fine for a short period of time, but after an extended session this can become tiring. And its not as though Split Second is at the more simulation end of the spectrum like GT5, where the extra proportional control of the shoulder button might have come in useful. To make matters worse, there isn’t even an option to change the button mapping so that you can use the “X” button as the accelerator, as has been the norm since Ridge Racer was the launch game on the original PlayStation in 1994.

Secondly there is the Down Loadable Content (DLC). If you can’t be bothered, or don’t have the skill to complete the game in single player mode and unlock all the cars, tracks and modes, you can simply buy the “Time Savers” DLC pack with them all in. I call this cheating! The developers have subsequently made a couple of other DLC packs available that include an extra track or car and additional game play modes. However, these were seriously over priced for what the offered over the original game.

Not with standing these two issues, Split Second is one of the fastest, most visually stunning and enjoyable racing game I have played in a long time, and comes highly recommended if you are in need of some exciting arcade racing thrills. 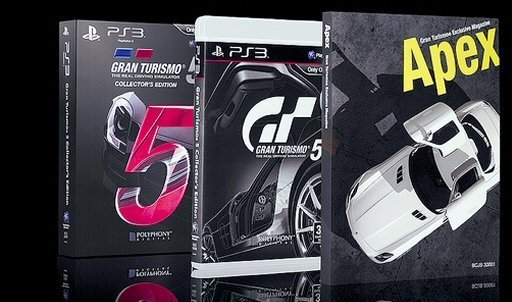 I’ve only spent a couple of hours with GT5 so far, but the graphics are amazing (bar the well publicised issues with the pixelated shadows) and the way the cars drive is much more realistic and demanding than previous entries in the Gran Turismo series. However, after such a long development cycle it is disappointing that GT5 falls short in several key areas. 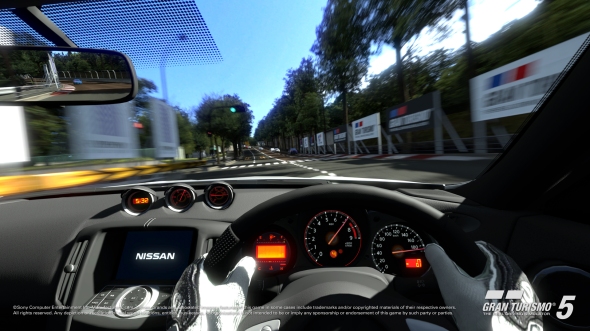 Firstly when Sony announced that GT5 would include Ferrari and Lamborghini for the first time, I was expecting that a complete range of cars would be available from both manufacturers. However, this is not the case, and there are only 12 Ferraris and 7 Lamborghinis included in the game. To put this in context there are 22 versions of the Mazda MX-5 in GT5. I have a feeling that a lot of paid for DownLoadable Content (DLC) will be released in the coming weeks and months.

Secondly it also appears that the developers have not made the most of the official license for the TopGear television show. While the track is accurately modelled, none of the reasonably priced cars (Suzuki Liana, Chevrolet Lacetti, Kia Cee’d) used in the show are available, and the track is only available for a number of pre-defined challenges. Hopefully the cars and the TopGear track will be unlocked as you complete these challenges. Finally there are the loading times between races. I can’t remember playing a game in the last couple of years which takes as long to load a race as GT5. I have a feeling that the loading progress bar is going to become a point of annoyance as I spend more time playing GT5.